Are you planning to extend your Brazilian Vacay? If yes then this time you should visit the cultural heritage of the country that is Minas Gerais. We have created a 5 day tour covering major cities of the states. This tour is the perfect oppurtunity for those who actually want to look deep inside the history of Brazil.

Day 1:The first day of the tour starts with Sabara it is located 20 km from Belo Horizonte Sabara was formed from a campo of bandeirantes paulistas in the end of the 17th century. Its appearance is closely connected to the legend of the mythical “Sabarabucu”, which ran in colonial Brasil and told the story of a sierra made of precious stones in Minas Gerais.

The town of Sabara was one of the cities that sent the most gold to the Portuguese Crown. which made it a rich city. The children of the local elite were sent to Europe to study and in the palaces you could find European-style furniture. The townhouses and churches in the historic city center are major points to visit of The Museu de Ouro, one of the attractions of the city, also represents this rich period in the history of Brasil.

The Casa da Intendencica, current head quarter of the Museum, is part of the architectural development.Another attraction is the Casa da Opera Opera House of the countrys oldest theatre, built according to Italian standard in a horseshoe-shape.

The local cuisine is another striking aspect of the city. The city has the Brazilian baroque outdoor museum. The historical center of the city is listed by the National Historic and Artistic Heritage Institute and it is possible to observe buildings of three Brazilian phases of art movement which has in Aleijadinho its greatest representative.The artist helped in the construction of the Church of Our Lady of Mount Carmel. His contribution is mainly in the masonry, in beautiful reliefs in the frontispiece and in home. Its interior, especially the statues of St. John of the Cross and St. Simon Stock, which have been recently restored, are among the top copies of his work.

Nearby to the church you will get a chance to visit the humble house where he lived. It is open for visits, but it is worth seeing and imagine about his routine.Other places worth a visit are the Museum of Sacred Art, whose collection is dedicated to the baroque history and it has several important pieces, including Aleijadinho. And the Museum of Gold, which depicts the Brazilian Gold Cycle, when the Portuguese explored the metal and sent it to Europe. The Museum operates in a house where the gold was coined and taxed, and displays tools used in the extraction, such as silver, weapons and furniture of the era.

On the second day of tour head to The city of Ouro Preto, situated in Minas Gerais, it is well known for its colonial architecture. It was the first Brazilian city to be considered a world heritage site by Unesco in 1980, and is a home to a magnificent Baroque architectural one of the best preserved in the world.

The history of the city begins at the end of the 17th century, when an anonymous adventurer encountered curious dark stones and initiated one of the biggest gold races of humanity.

The territory that today make up Minas Gerais began to be occupied quickly and various camps sprang up. In 1652, they were grouped under the name of Vila Rica – today, latley named as Ouro Preto.Tons of gold were sent to Portugal in the 18th century, from the city and what remained in the region produced Baroque wonders that enchant those who visit the city.In the historic center, alleys and streets you will find rich fountains, townhouses, chapels and churches of the 17th and 18th centuries.Another example of the Baroque style, is the Matriz Nossa Senhora do Pilar, that is decorated with more than 400 kg of gold. The graceful Museu do Oratorio, another place is the Sao Francisco de Assis which was designed and decorated by Aleijadinho, and is considered his masterpiece.

The sculptor Antonio Francisco Lisboa, Aleijadinho, was one of the most important artists of Minas Gerais Aleijadinho died in 1814, and was honored in 1968 with the creation of the Aleijadinho Museum, dedicated to preserving and exhibiting objects of sacred art.The Museu da Inconfidencia which guards the memory of one of the most important separatist uprisings of the colonial period, is also another attraction of Ouro Preto.Ouro Preto is 120 km from Sabara so you have to rent for a car or use local transport for this visit. 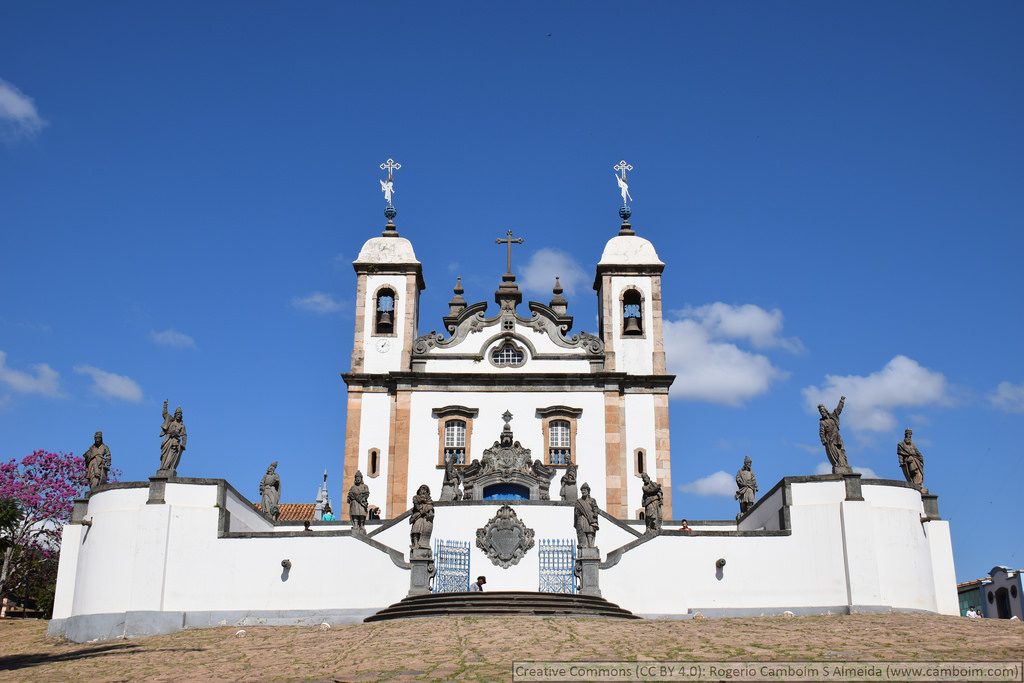 On the thirs day of the tour The main attraction Congonhas. A sick Portuguese immigrant Feliciano Mendes swore to build a temple if he recovered his health. Thus, the construction of Sanctuary of Bom Jesus de Matosinhos began in 1757. However, Feliciano Mendes died before seeing the finished work. It is a pity because the sanctuary is one of the greatest examples of baroque art in Brazil and it was listed as World Heritage Site by UNESCO.

Beyond the beauty of the church, its chapel is a masterpiece of Aleijadinho, the set of soapstone statues of 12 prophets, which includes the sculpture of Daniel, considered the most beautiful made by him in his entire career. There are other pieces of the sculptor, such as the impressive Via Sacra, six chapels representing the steps of the Passion of Christ.

You can see the whole history of the Basilica and the religioud history of the country the Museum of Congonhas. The city is 60 km from Ouro Preto and 115 km from the city of Tiradentes, our next stop.

On the forth day of the tour visit Tiradentes it is a city made in baroque style. It is located at the foot of the Serra de Sao Jose the city was just a mining camp in the early 18th century. In 1718, it became Vila Sao Jose in honor of the then Portuguese Prince D. Jose I.With the proclamation of the Republic, the city was renamed Tiradentes, name of the martyr of the Inconfidencia Mineira who was born nearby and who died fighting against the monarchy.When gold became scarce in the region, the city was forgotten and disappear, it was rediscovered in late 1970. Exceptionally preserved thanks to the decades of long isolation, the Baroque architectural ensemble of Tiradentes gathers jewels like the charming fountain of the Sao Jose Fountain, built in 1749 to supply the city with drinking water and which runs till today.

Another outstanding attractions of the city is majestic Church of San Antonio, and
Largo das Forras, the central city square, houses the City Hall and numerous handicraft shops, restaurants and inns. It was here, in 1888, that slaves gathered to celebrate the end of slavery.

In August, Tiradentes hosts one of the most exciting events of brazilian cuisine the Tiradentes Culture and Gastronomy Festival. Created in 1998, the Festival brings together renowned chefs of Brazilian cuisine and other countries too. In 2015, more than 350 professionals attended the event and held 200 gastronomic activities, between classes, dinners and restaurants in the square. 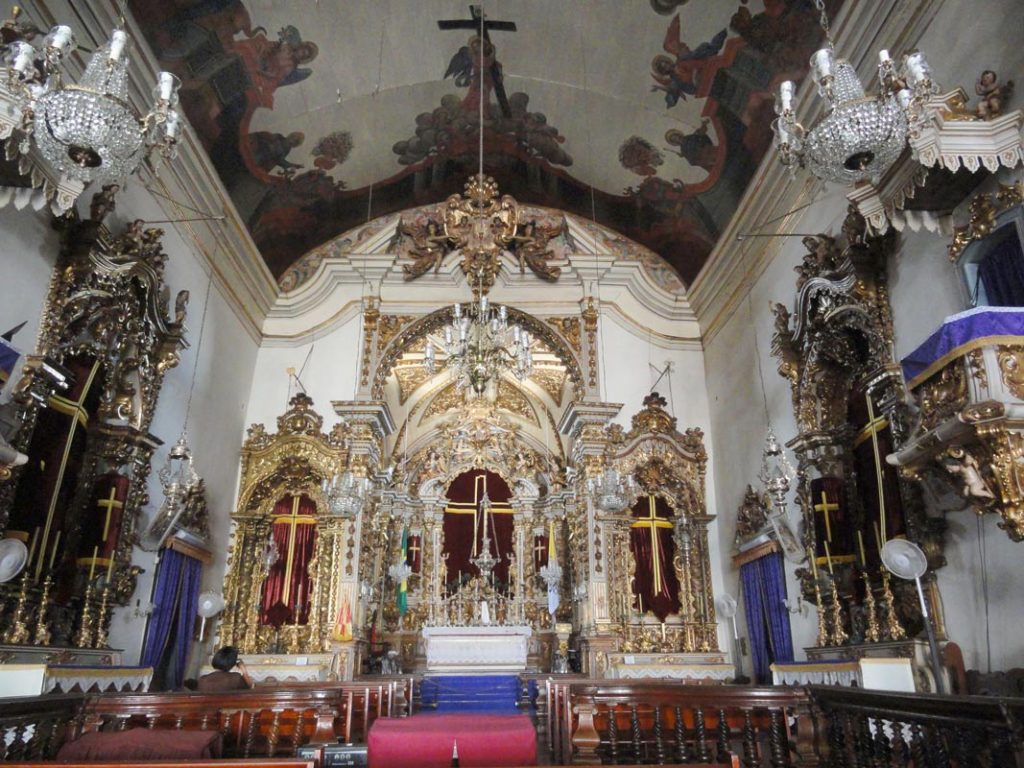 At the end of the tour that is on the fifth day of the tour you should visit Maria Fumaca which is a local and popular steam locomotive, it is a 15-km ride between the cities of Tiradentes and Sao Joao del Rei. You will feel old school like 20th century, when the locomotive was built that makes this itinerary daily. Choose the right side of the locomotive to have a better view.

Sao Jao del Rei is also known as the city of bells because its churches bell to announce masses and the Hail Mary time. Among those who bell is the Basilica Cathedral of Our Lady of the Pillar. Aleijadinho left its mark on the Church of St Francis of Assisi, also listed by IPHAN . Built in 1774, the basilica is in a garden framed by imperial palm trees. Its door was carved in soapstone and its interior houses a large crystal chandelier, in addition to the tomb of the former president Mr. Tancredo Neves. He was born in the city, the politician has a memorial in his honor.

At the end of the trip, you will get back to your home with the historical essence of the country.