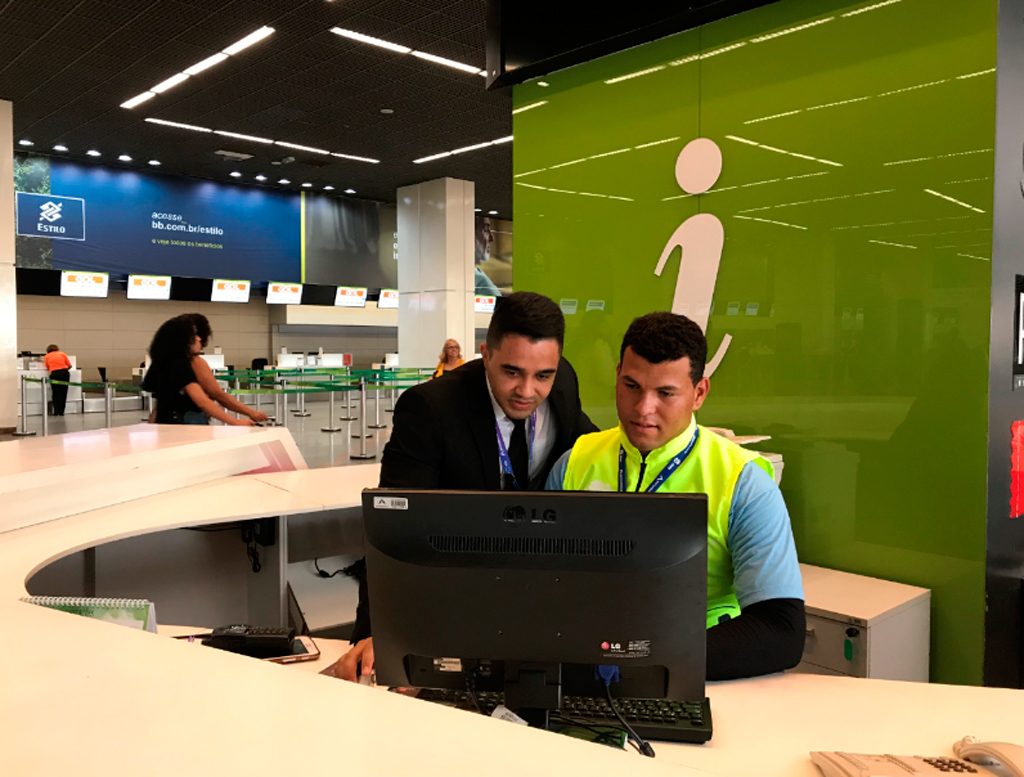 With the high summer season coming, the flow of passengers at Brasilia Airport increases, as does the demand for information and assistance to travelers. To reinforce the customer service team during December, five students from the Federal District’s Parents and Friends Association of the Exceptional (APAE-DF) are doing a 20-day internship at the terminal in Brasilia. The job is to answer the questions of the passengers, check the terminal’s cleanliness and call cleaning and maintenance teams when necessary, as well as inspecting the busy areas of the airport.

New employees have intellectual disabilities and are assisted by APAE-DF. At the institution they take courses and receive training by professionals of the Association. Inframerica’s goal is to include these students in the job market and teach them what it is like to work in the airport sector. The concessionaire’s attendants are “godparents” and “godmothers” of each of the five trainees and are accompanying them daily in the established routines. The team is identified with jackets made especially for the program.

For the vice president of Brasilia Airport, Juan Djedjeian, the project will bring benefits to both the terminal attendance and the development of APAE-DF students. “The boys will have the opportunity to know the work dynamics of the airport, have contact with several people and especially help us. A great opportunity for the professional development of these young people and our caregivers. I believe this project will also raise awareness and surprise travelers who are served by them, ”he says.

For Diego Banzer, Terminal Customer Service Coordinator, welcoming the APAE-DF student group has been very important for the development of the airport staff. “We had so many volunteers on the team wanting to help and be the sponsor of the students who positively involved the whole team. They are very attentive and have helped a lot. We are all delighted with the work they are doing, ”says Banzer.

“We are happy because the role of the Apaeano Movement is precisely this, to unite collaborators and partners in favor of people with intellectual disabilities, ensuring the development of their potential and promoting their inclusion, especially in the world of work”, says Diva da Silva Marinho, president from APAE-DF.

The Cheesecake House, the Vienna restaurant, Grão Café and Cheesecake King are shopkeepers who have trade in the terminal, are supporting the action by providing snacks for the trainees. Stilo Flex companies and the uniform production company Sunpoll are also project partners.

On November 25, 27 and 29, students took a course on how the service is done, what are the daily tasks and how the airport works. As many of them were never at the airport or never traveled, they toured the terminal where they got to know the backstage, the services and visited the interior of an aircraft.

The trainees started at Brasilia Airport on December 2 on a 4/2 scale, that is, they work four days in a row and take two days off. The last day of work will be the week before Christmas, December 20, one of the days that promises to be the busiest at the airport. Terminal Brasiliense is the 3rd largest airport in Brazil in passenger traffic.

Inframerica estimates for December a flow between 1.5 million to 1.6 passengers at Brasilia Airport. The expected air movement for the month is 10,706 landings and takeoffs, of which 398 flights are extra to meet the demand of the high summer season.

The busiest days should be December 19th, 20th and 21st, the eve of Christmas celebrations, and December 27th and 28th, departure for the New Year. Inframerica calculates for the dates a daily movement of approximately 59 thousand passengers.

The most sought after regions are Northeast and Southeast of the country. The international movement must also increase. The expectation is 70 thousand shipments and landings in the period.

The Association of Parents and Friends of the Exceptional of the Federal District (APAE-DF) exists since 1964 and serves people with intellectual disabilities over 14 years.

The entity benefits about 750 people a year, including professionals with disabilities accompanied in the labor market and apprentices still in training at the entity’s workshops.

In addition to its headquarters, located at Asa Norte in Brasília, the Association has other service units in Ceilândia, Sobradinho and Guará.