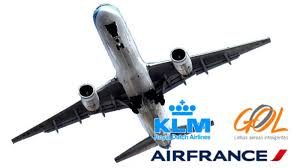 Brazilians have another route to reach Europe. In October, the Air France – KLM and its Brazilian partner airline GOL made available flights departing from Fortaleza airport to Paris and Amsterdam. This is the first time that Air France and KLM simultaneously opened a hub in cooperation with a local partner. The route is part of the company’s new era, which launched a low-cost airline called Joon.

The capital of Ceara is the third destination of the French-Dutch air group in Brazil, which already connects Paris and Amsterdam to Sao Paulo and Rio de Janeiro. The route will be used as a shorter alternative by passengers from Brasília, Natal, Recife, Salvador, Belem and Manaus. This, of course, not considering direct flights leaving these cities to Europe and connections of other airlines.
TAP Airlines offers departures from Lisbon, with the widest options of
destination to Brazil among all international airlines. Gol, partner of Air France – KLM in Brazil, will increase the connectivity of these cities with Fortaleza to create convenient connections with flights from Amsterdam and Paris.

The company believes travelers will opt for the route because the travel time will be shorter. Flights between Fortaleza and Europe will last approximately nine hours. For example, a flight leaving Brasilia at 2.30PM, arriving in Fortaleza at 5:00PM. And departing for Amsterdam at 7:50PM, will land in the Dutch city at 10:00PM the following day, totaling 14 hours and 20 minutes. If the customer chooses to arrive in Paris, the time of 15 hours and 15 minutes of duration (via Sao Paulo) is reduced to 14 hours (by Fortaleza). The lap time is reduced from 14 hours and 30 minutes to 12 hours and 58 minutes. “The choice for Fortaleza took into account the location, proximity to Europe and other cities in the North and Northeast of Brazil. It made no sense for a person from Belem, for example, to catch a flight to Sao Paulo and then to climb up to Paris.