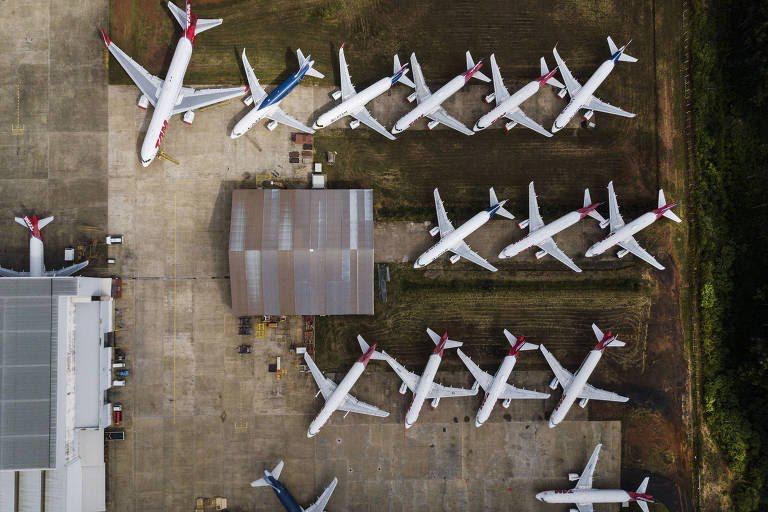 Earlier this year, all forecasts for the Brazilian airline industry were optimistic. The country’s three major airlines – Azul, Gol, and Latam, which account for 99% of the domestic market – had made a profit in 2019 and planned to expand. All this is now overdue to the coronavirus pandemic, which since March has hit the demand for flights. To survive, airlines renegotiate payment terms and exemptions with leaseholders and dealerships that own hangars. They also cut wages and ask the government for help – which has not yet arrived. Without flying, the company loses revenue and still has costs to keep the plane on the ground. An aircraft lease can cost up to US $ 100 million (R $ 523.7 million), an amount diluted in monthly installments throughout the contract. The bill per plane can reach US $ 500 thousand per month (R $ 2.62 million) – while the inoperative Avianca Brasil paid in the Airbus A320 today.

Preparing a plane to stand still, as the three giants in the sector have done, costs between R $ 20,000 and R $ 120,000 in smaller aircraft, apart from monthly reviews, which reach R $ 13,000 per plane on Latam, an airline with the largest fleet. There is also the cost of parking these planes in hangars or airports. Even though they normally operated almost half of last month, the three companies saw demand drops between 25% and 38%. The numbers refer to the RPK, a metric that takes into account the number of paying passengers and the distance traveled by them.

The Brazilian air network has been reduced to about 10% of normal. Gol, the leader in the domestic market, reduced its offer by 92% and maintains 50 flights a day. Latam, at 95%, and suspended international flights in April. Azul maintained 70 daily flights, 90% less than normal. The biggest cost for companies is fuel, which historically represents around 30% of expenses. Ondino Dutra, president of the National Union of Aeronauts (pilots and flight attendants) says that spending on crew payroll is in general 7.5% of the total. The figure was 9.8% in 2015, according to Abear (airline association). Leasing exceeds 10% of expenses, according to Dutra. Almost the entire fleet of companies is leased planes.

“As kerosene is expensive, it is better to have newer airplanes, with more efficient fuel consumption. Leasing is used to maintain this constant fleet renewal ”, says Marcelo Bento, Azul’s director of institutional relations. “The airlines rent the plane, use the equipment and the cash flow pays the lease month by month,” he says.

The cost depends on factors such as the model and age of the aircraft, its depreciation, length of contract, and risk of default. Turbines can also be rented. The total lease price for a Boeing 737-800, a model used by Gol, can reach US$ 100 million, according to experts. The amount is diluted monthly in contracts of up to eight years.

The large leasing companies are all foreign, and the contracts are mostly governed by American law, according to Renato Moraes, partner at Cascione. There are currently two common leasing models, according to Patrícia Lynch, a partner at Motta Fernandes.

“The most used and cheapest is the operational, which works as a rental, but there is also the commercial one, in which there is the option to purchase the aircraft at the end of the contract”.

The most used lease format is sale-leaseback, says Lynch, in which the airline orders new planes from a manufacturer and negotiates the transfer of the purchase before the equipment is delivered. “The airline gets good discounts from manufacturers when purchasing several planes, and plans to transfer to the lessor, who settles the aircraft and rents them back.”

With the drop in ticket sales, most planes are on the ground and do not generate revenue for the payment of the lease. Gol has asked leaseholders for a six-month grace period in contracts.

Azul, which has 114 aircraft out of operation, has not paid leases. “Lessors have been patient because it is a worldwide problem caused by the virus. In case of resumption of the planes, they have nowhere to stop them or customers to rent now. How the debt will be paid is something to be negotiated later on, ”says Marcelo Bento.

Leaving an airplane on the ground involves a series of routine maintenance activities, apart from the amount paid for the hangar. Today, airlines are trying to leave as many planes at Infraero’s airports, which have not been charging fees.

At Latam, which has 126 planes stopped, agreements with Aeronautics allowed the use of air bases in Brasília and Rio de Janeiro, but it is the company’s maintenance center in São Carlos (SP) that has the largest number of aircraft parked. There are 35.

If a plane has been on the ground for 24 hours and there is no flight forecast, it is necessary to start the so-called active preservation, which costs about R $ 20,000 in a plane and takes one day to make, says Alexandre Peronti, director of maintenance of Latam. In this process, the aircraft can remain inactive for up to six months, but there is a monthly maintenance cost of R $ 13,000.

It is necessary to cover the cockpit windows to prevent the incidence of light and heat from damaging the control panel. Turbines, sensors, and other holes in the aircraft are also sealed to prevent accumulation of dirt and moisture. The battery is disconnected. Areas, where there is exposed metal, receive oil to prevent rust. It is also necessary to keep the tank 10% full so that there is no dryness.

“Once a week, we drain the tank and check for infiltrations. Every 15 days, the auxiliary power unit is switched on [engine that stays in the tail and is responsible, for example, for the operation of lights and air conditioning with the plane on the ground] and we move the aircraft’s controls, ”says Peronti.

In addition, once a month it is necessary to start the engines on the ground and test the pressurization. For aircraft that will be out of action for more than six months, the process is the storage process, which is more expensive – R $ 120,000 per aisle plane – and takes up to a week.

The prospect of resumption is what influences the decision on how many aircraft to park and for how long. At Latam, the forecast is not to have 100% of the fleet in operation for at least the next six months.

“If we manage to return to the levels of March until the end of the year, it will be a miracle”, adds Marcelo Bento, from Azul.

In addition to the unpredictable duration of the pandemic, the sector is concerned with the speed of recovery and the level of prices. “We don’t know how demand will return, at what pace. And in a scenario where companies have more planes and people than necessary, fares will be low ”, he says.