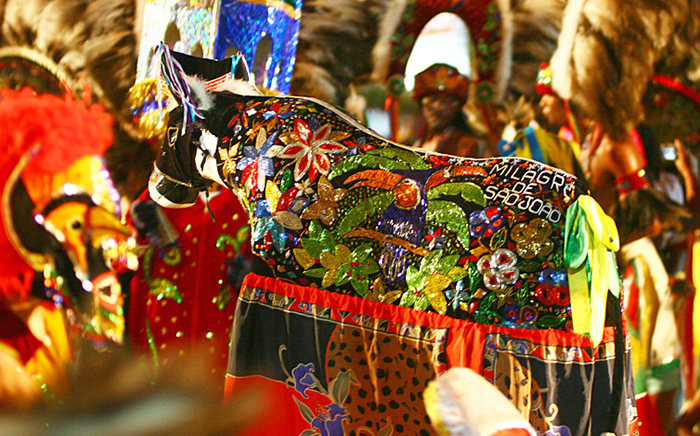 Every country has its cultural uniqueness, these traditions has some story to tell about the country, like other country brazil also have a hidden cultural event which is known to very less travelers, Brazil being so diverse in everything is rich in culture and traditions, but sometimes these cultural activities are overshadowed by huge carnival fest and grand new year parties. Among all of them one is Bumba Meu Boi do Maranhao which is grand yet less known. Let’s take the curtains off from Bumba Meu Boi cultural Party of Brazil.

Bumba Meu BoiMaranhao is the very loved cultural party of Brazil, which was originated in 18th century and evolved as the countries most loved festival. During this festival in a tradition Lower class Brazilians mock and criticize higher status through a comedic folklore story conveyed through song and dance. Though the festival is not known internationally as Carnival and other Brazilian festivals, it is way much older and deeply rooted in the culture of Brazil. The tale can vary from region to region and social setting at which it is practiced. However, its core theme always remains the same, with a focus on the death and resurrection of an ox.

The festival is first celebrated in mid-18th century by the lower-class Brazilian communities who were discriminated by the upper-class communities and left to leave dreadful lives. That was the time when bumba meu boi was originated, during this time slaves and rural workers come together to celebrate the joy this festival is significant in Brazilian history because it cuts discrimination rope.

Gradually this festival become more popular in 19th century, when the people start performing and telling their stories in form of song and dance, soon it got hype and become a communal affair. By the 20th century the tradition become annual sometimes bi annual, in 21th century it influenced almost every region of the country.

Brazil celebrate to type of Bumba Meu BoiMaranhao one which follow old traditions and celebrated majorly in north and northeastern stated like Amazonian cities and villages majorly in Maranhao and other is modern transition of the old festival which is celebrated in Rio de Janeiro. In both the form ox is the major centerpiece and the whole tradition revolve around it.

at the time, they saw as ox as an animal of high economic regard due to its use in farming. Though, ox’s were also highly involved in colonial’s social lives, as bullfighting and calf-dancing were very popular. These are thought to have been passed down from lower class Portuguese families, as similar social activities can be traced back much further in Portugal.

A literal translation for “bumbaMeu” is “dance my ox”

Ox is the principal figure in the whole tradition, a white master, a black pregnant woman, a Vaqueiro or cowboy, others vaqueiros, índios, índias and caboclos (indigenous people), a priest, and a doctor (or indigenous healers) are the major character of the tradition.The audience is also a major component or role players of the performance, as passionate responses from spectators provide a hectic atmosphere.Additionally, performers are known to become playfully physical with the audience, though with large consumptions of local alcoholic drink Cachaca, leads to create violence sometimes.

Now this tradition is celebrated for more than 200 years in the historic city Sao Luis. During the festival streets of the capital of Maranhao is decorated with colors, city turns into an open stage where different rhythms and performances of several folkloric groups takes place.

The celebration enacts the capture, death, and resurrection of the iconic BoiBumba. The party is conducted by five types of rhythm called “sotaques”, each one has their own outfits and instruments accents of matraca (ratchet), zabumba, orchestra, pindare, and costa de mao.

In 2011, the festival was registered in the Registry Book of Celebrations, created by the National Institute of Historic and Artistic Heritage (Iphan) to record festivities of great sociocultural importance. All over the state, there are more than 400 Bumba-Meu-Boi groups.

How to get there: Taxi