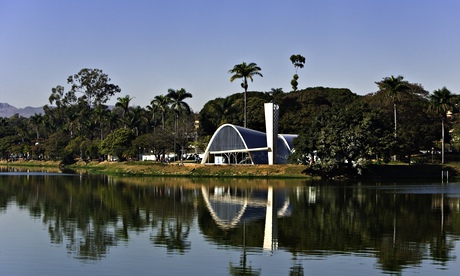 No trip to Belo Horizonte would be complete without a proper immersion in the local comida mineira – the much-loved rustic cuisine of Minas Gerais. For that, the farmhouse restaurant Xapuri is hard to beat. Slide on to a bench at one of the long wooden tables under thatched, open-sided buildings, and keep an eye out for the sparky chef-proprietor, 75-year-old Dona Nelsa. She was one of a group of local chefs invited to Madrid Fusión last year, when the high-end food festival paid special homage to the Minas culinary heritage. While not the cheapest option in town, Xapuri’s portions offer value for money: fried pork ribs with rice, feijão tropeiro (a bean, egg and sausage hash) and kale (R$89, around £24 or $34) or the shredded dried beef, baked and served inside a pumpkin (£30 or $49) easily feed two, three or even four. A plate smattered with sweet dollops from the dessert buffet (£2 or $3.30 per 100gm) and a cachaça chaser will finish things off nicely. Hammocks are on hand should a few minutes of shut-eye be in order.
• Rua Mandacaru 260, Pampulha + 55 31 3496 6198,restaurantexapuri.com.br 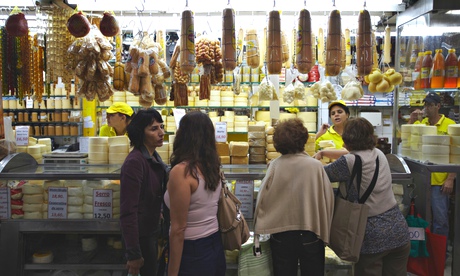 A delicatessen in Mercado Central. Photograph: AlamyBehind the imposing façade of BH’s central market is a warren of food and drink stalls, selling fruit, nuts and ingredients from all over the country, though it’s the local treats from Minas Gerais that are most interesting: jars of sweet, caramelised doce de leite, goiabada (guava jelly), bottles of cachaça and artisanal cheese can all be found in abundance. A simple “posso provar?” (“can I try?”) should yield tasty results. When beer o’clock strikes, head to one of the multitude of no-frills bars inside the market. Bar da Lora and Casa Cheia are both former champs of Comida di Buteco – a competition taken very seriously each year, in which locals vote in their hundreds of thousands for the city’s best bar food – so sharpen your elbows and dive in. Both bars still have their winning dishes on the menu; at the latter, try the mineirinho valente (£6.30 or $10.44) – a cornmeal soup with cheese, smoked pork, sausage, pork rib and spinach and sweet biquinho chilli peppers.
• Avenida Augusto de Lima 744,  mercadocentral.com.br 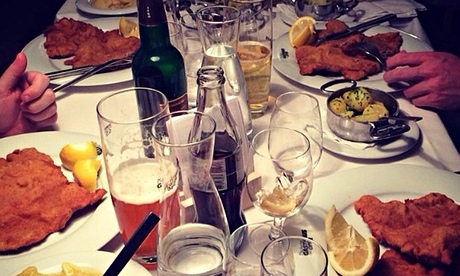 For a nation of self-proclaimed beer lovers, it’s surprising that Brazil has taken so long to cotton on to the joys of craft beer. The last five years or so has seen an explosion (or perhaps a small spark would be a more apt analogy given the size of the beer market) in interesting brews, both local and imported, offering an expensive but welcome alternative to the bland big-brand alternatives. Leading the charge in Belo Horizonte is Krug Bier, the city’s first microbrewery when it opened in 1994. The beers are now brewed out of town, but a stripped-back, warehouse-style bar remains. Order a turbo-shandy Caipbeer (draught beer with cachaça and lime, £2 or $3.30), and a portion of the stomach-lining eisbein – slow-roasted pork knuckle with sauerkraut and boiled potatoes (£16 or $26.51 for two).
• Rua Major Lopes 172, São Pedro, + 55 31 2535 1122, krug.com.br 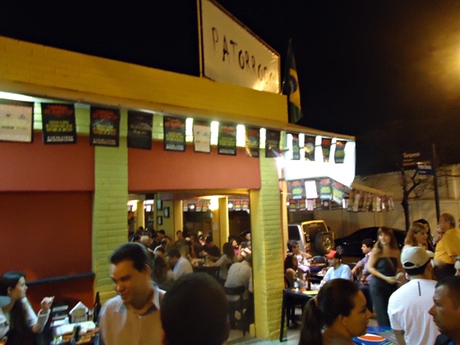 It’s hard to tell where the pavement ends and the bar begins at this corner favourite, where unrelenting crowds, happily ensconced or else angling for a table, make it even harder to navigate. The bright lights of big-brand beer signs and a ceiling covered in strips of chita – Brazil’s dazzling version of chintz – liven up an otherwise plain interior. The main draw here is the award-winning food – bar fare done in a refreshingly creative way, using an interesting mix of local ingredients, like the spiky green maxixe or bitter green jiló vegetables or naughty splashes of treacly bottled butter. Pastry that usually encases minced beef or cheese in the classic bar snack pastéis is shaped into flat rounds and topped with spicy sun-dried beef ragout, cream cheese and dehydrated jiló (£3.50 or $5.80 for 10) or rolled into mini cones and stuffed with sausage ragout and a Gorgonzola sauce (£5 or $8.28 for 14). A simpler choice is the homemade torresmo (pork scratchings) served with a pineapple sauce (£5.60 or $9.28). “Trem bão” (“too good”), as the Mineiros would say.
• Rua Turquesa 865, Prado, +55 31 3372 6293, Facebook page 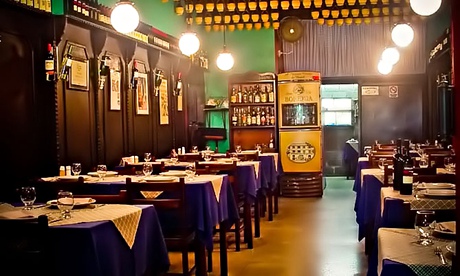 There’s a whiff of nostalgia in the air at the 52-year-old Cantina do Lucas. Set inside the Maletta building – which in its heyday was at the heart of the city’s bohemian life with bars, restaurants and music clubs frequented by an artsy set – this old-timer is still a favourite with local writers, filmmakers and musicians. Families join the throng at weekends, divvying up the gargantuan portions served here – one main officially serves two, but usually does three or four. Classic orders include the very Brazilian take on Italian cuisine, surprise à moda – a car crash combo of steak Milanese stuffed with ham and mozzarella, served with risotto, fried banana, chips and (why not?) two fried eggs (£17.50 or $29, serves three 3). The cosiest tables are inside, under the hanging wicker-wrapped wine bottles.
• Avenida Augusto de Lima 233, ground floor (units 18 and 19), +55 31 3226 7153, cantinadolucas.com.br

Red and gold columns mark the entrance to Yun Ton, the oldest of Belo Horizonte’s admittedly limited cadre of Chinese restaurants. This is family-style Chinese dining, (run by the third generation of the same family) with large menus and equally large portions. Going in a group is a sensible tactic if you want to try more than one dish, and guarantee a bit of a buzz – at weekends, families fill up the two spacious dining rooms. Start with the crunchy beef and cabbage spring rolls (£1.50 or $2.48) before contemplating the list of 100 or so mains. If in doubt, stick with the favourites, frango phoenix (£12 or $19.88) – chicken in a black bean sauce – or the Gong Bao chicken, called frango xadrez (“chess chicken”) in Portuguese for its bite-sized cubes of chicken, stir-fried with peanuts and Sichuan pepper.
• Rua Santa Catarina 946, Lourdes + 55 31 3337 2171 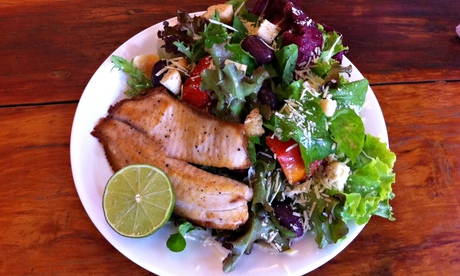 Just over two years old and already a big player in the city’s food scene, Mercearia 130 is one of the many BH eating establishments blurring the lines between bar and restaurant. An egalitarian crowd pack out the tables at lunchtime and in the evening, squinting to read the options chalked up on blackboards high above the glass-walled kitchen. The food here flits between comforting local fare (don’t miss the torresmo de costela – four pork ribs with perfectly crisp crackling, £9.50 or $15.74) and more sophisticated options such as ceviche (£7 or $11.60), steak tartare (£7.30 or $12.09) or oysters flown in from the southern state of Santa Catarina on Thursdays (£6.60 or $10.93 for six). Foreign airs aside, the mains here are refreshingly affordable: order up a steak or fillet of fish for £5, served with one of the daily-changing sides (steamed veg, salad, risotto and the like). Arrive early if you want to bag a table.
• Rua Ivai 130, Serra, + 55 31 3658 3395, Facebook page 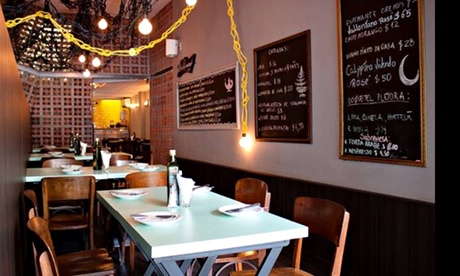 Pletora does Middle Eastern food in a small, funky setting and is one of the few places in town where you can eat a reasonably priced meal without needing a football squad to help polish off a plate, and where being vegetarian doesn’t mean going hungry. Tables and mirrors line one side of the compact dining space, with naked lightbulbs strung at random from the ceiling. They do moussaka for £7 or $11.60, with a meat-free lentil version for £5.20 or $8.61, and a baked beef kibbeh (£4 or $6.62) served with coalhada (a smooth curdled milk), which you can team with either crunchy fattouche salad or herby tabbouleh (both £3 or $4.97). A set mid-week lunch of a salad and a hot main costs £5 or $8.28. Round things off in a sticky fashion with a slice of baklava (£3 or $4.97). 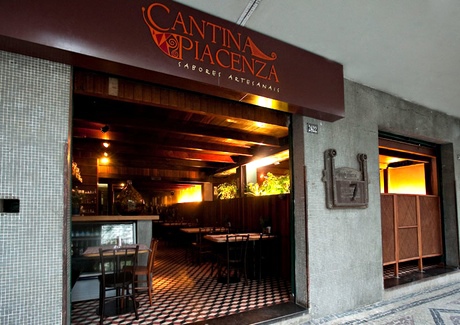 With a menu pitched somewhere between traditional Italian and out-and-out fusion, local ingredients sneak their way into dishes on the evening menu at Cantina Piacenza, with the likes of smoked prawn risotto with a passionfruit sauce (£13.50 or $22.37) and papardelli with sun-dried beef ragout,requeijão cream cheese and crunchy kale (£13.80 or $22.87). It’s the lunch offering, however, that is the real crowd pleaser. Opt for the fair-priced three-course set lunch for around £10, with a salad, pasta and dessert, or one of the homemade pasta dishes starting from £5 or $8.28 – the lasagne (£5.30 or $8.78) is generously proportioned and done the traditional way without the ham that can be found lurking in most Brazilian lasagnes. Expect no clichéd cantina decor here – tiled floors, wood-panelled walls and a simple posy of fresh flowers on each table are tasteful and fuss-free.
• Rua Aimorés 2422, Lourdes, +31 2515 6092, cantinapiacenza.com.br 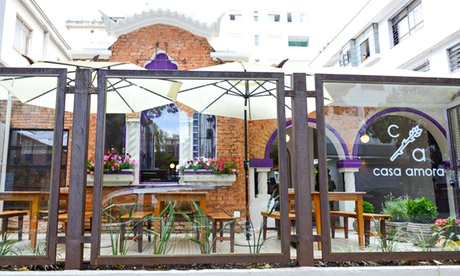 Set on a leafy street, Casa Amora is a newcomer to the upmarket neighbourhood of Savassi. It’s a lunch-only spot, pitched somewhere between the ubiquitous Brazilian self-service lunch buffet and an à la carte restaurant. A choice of three meat or fish dishes is chalked up on the board each day, which can be teamed with up to three salads or hot sides. A welcome break from heavy Mineiro food, the focus here is on healthy eating with a little creative flair, in the likes of buckwheat with caramelised banana, grilled chicken in an oriental sauce and sweet potatoes roasted in ginger and coriander. Scope out what looks good behind the glass counter, then get in line to point out your chosen combo (with prices varying from around £5 or $8.28 to £7 or $11.60 all in). Then grab a table in the bright, pleasant dining room, where touches like hanging herb pots and tin mug lampshades lend a cutesy charm.
• Rua Paraíba 941, Savassi, +55 31 3261 5794, Facebook page