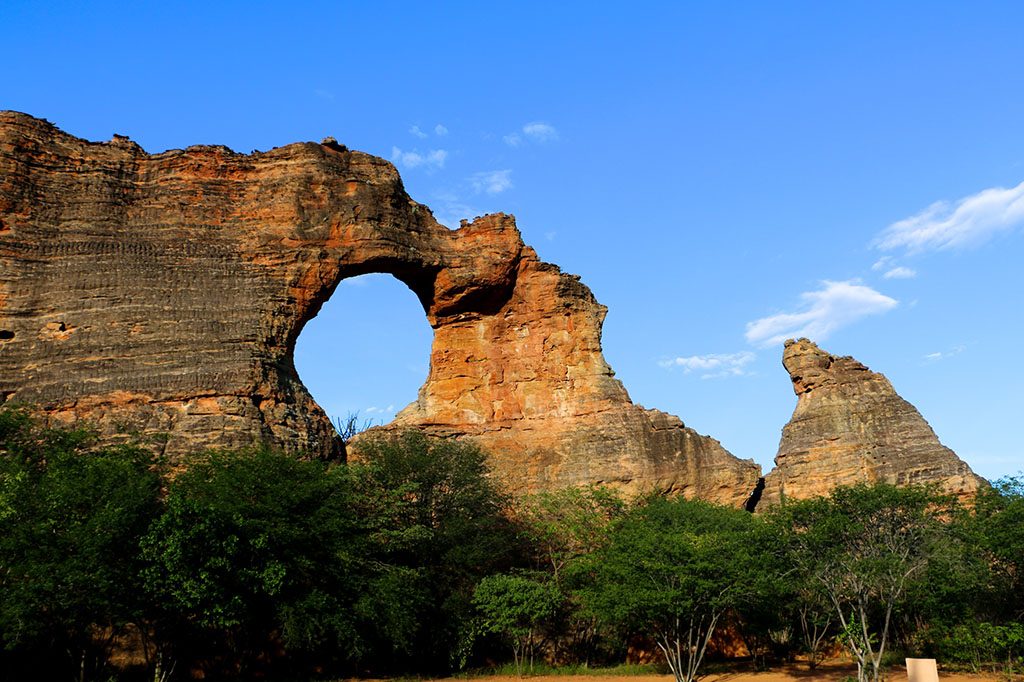 Brazil a tropical paradise is the hidden treasure of archaeological sites such as museums, churches etc.Northeastern region of Brazil, majorly the State of Piaui, which is located at the Serra da Capivara National Park, where you can find the oldest traces of human presence in the Americas which makes it an archaeological site.The artifacts and cave paintings discovered there is aged more than 100000 years, when its first inhabitants were still living in caves.The region has been occupied for much longer. Millions of years before humans, the greatest beings which have ever inhabited the planet, dinosaurs, could be seen there. Their presence left marks that have been visited and observed by tourists from all over the world.In this tour, We have created a three day itinerary where you can take a whole new experiance and you can follow the footsteps of our ancestors, and see the never seen before things from your own eyes. We suggest you to save a week for the trip as there is huge distance between one place to another, so you need atleast one day for travelling between them and one day for visiting them.

Day 1: The enigmatic Pedra do Ingá

Start the day with the Inga Archaeological Site, which is located 45 km from Campina Grande, where the famous Pedra do Inga is located. It is also known as “Itacoatiara”, colored stone, in Tupi-Guarani, it is an rock that is 24m wide and almost 4m high,in which images of animals, human beings and even the Orion constellation have been carved. There are archaeologists who argue that the stone is of Phoenician origin. Others believe it to be the work of aliens. In the same archaeological complex is the Natural History Museum, with fossilized skeletons which are more than 100 million years old, as well as polished stone tools, artifacts and many explanations on the materials found there.Another museum that is worth a visit, despite having no relation to archaeology,the Museum of Folk Art of Paraiba which is designed by Oscar Niemeyer, it is also known as Museu dos Tres Pandeiros, after its three buildings in the shape of pandeiros a brazilian hand frame drum, each one housing a different kind of art: music, cordel literature and crafts. The museum has thousands of exhibits and high technology structure, with audio and video resources that help visitors to know the culture of Brazil.

The mixture of both ararchaeological sites and nature is Vale dos Mestres,which is located in Caninde de Sao Francisco, it is 450 km from Campina Grande,this place is less known hence it is preserved and covered with stunning canyons, rivers which are excellent for swimming and lots of natural beauty.Its famous trail is 2km in length and passes through archaeological sites with rock carvings that are more than 3000 years old, which resemble animals and human beings.It has The typical vegetation of caatinga, xique-xiques, mandacarus, and large lizards from the genus Tropidurus.Visit the Xingó Archaeology Museum,of the Federal University of Sergipe. There, you can learn more about the region’s archaeological heritage. In its collection, there are ancient artifacts and tools, animal and human bones, various fossils and many explanations on the origin of men and on the occupation of the place.

Day 3: One of the most important archaeological sites in the world

On the third and last day of the tour visit one of the most important archaeological site of world is Sao Raimundo Nonato, Piaui, the Serra da Capivara National Park which is 700 km away from Canindé de São Francisco. It is situated in an area of almost 100000 hectares, there are numerous trails and paths that
lead to a tour of prehistoric times. The largest collection of rock paintings on the planet is located at this place. It consists of approximately 30000 images representing human beings and animals in various scenes, scattered around the 1,354 archaeological sites. The oldest date from 12000 years ago and are very well preserved, because they remain protected from the rain and sun which make it Unesco’s World Heritage list.After viisting the site its time to visit Fundacao Museu do Homem Americano. It displays some of the many archaeological treasures found there, like ancient fragments of bonfires and ceramics, and funerary urns and skeletons. with this end the tour any carry ancient folklore along with you.